skip to main | skip to sidebar

So it's been a pretty miserable start to the Twins' season. They were swept by the Baltimore Orioles, the same Orioles who finished the 2011 season with a 69-93 record (which, of course, was six games better than the Twins' own record).

Minnesota failed to score in the first seven innings in any of the three games, but did miraculously avoid being shut-out in any of the games either. They scored a total of 5 runs against an Orioles pitching staff that, last year, was easily the worst in the league. Even the Twins, who finished 29th in the Majors in ERA and runs allowed, along with opponents' OBP, SLG, and OPS, looked down their noses at the Orioles' pitching... because Baltimore was dead last in each of those categories, some by a wide margin.

Of course, it was the Orioles laughing this whole weekend. And it's everyone collectively laughing that, in a fantasy preview of the AL starting pitchers taking the mound twice this week, Nick Blackburn was placed all alone in a group called "This is seriously a terrible [expletive] idea". Even Baltimore's Brian Matusz made it into a superior group, despite his heroic contributions to the Orioles' league-worst pitching in 2011, including a 10.69 ERA and 2.11 WHIP in twelve starts. And he even pitches against New York and Toronto. I guess that's a pretty accurate picture of just how good Nick Blackburn is.
Posted by Twin #1 at 1:36 PM

Let us hear your thoughts! 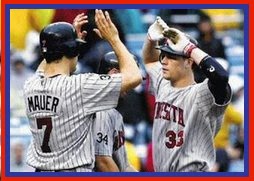